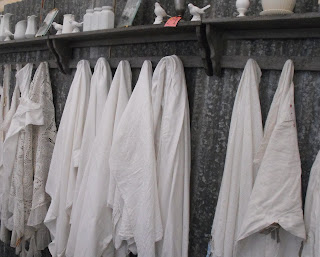 Can't believe that I have not been in touch for so long! I feel like that I have been running around with my hair on fire! O.K., so last time we talked, I was working on the man cave, but the rain for weeks, shut us down. Then we had to hit the road to the Urban Market show, where all of my fabulous friends were there to sell. I was able to capture a few images while I was there. ( Left) you will see the unbelievable space of Linda and Ludmil from Willow Nest. It was fabulous. The corrugated tin was the perfect backdrop for all of the wonderful, white, "French" stuff.
Next, we see a cabinet from Peg and Jon's from "French Vanilla." Careful not to get caught up in the stampede to Peg's booth! 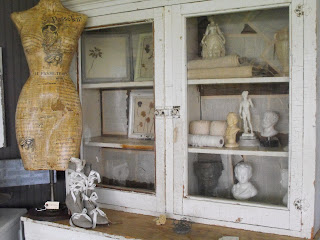 (Below) another shot of Willow Nest...Bravo! 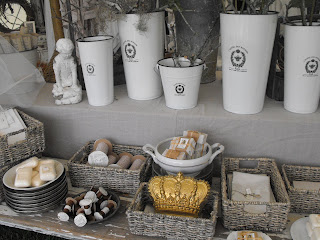 O.K. since we last talked much has been going on. We left the Urban Market, and as most know, Victoria is back from college, and needs a space of her own, which we were discussing on the way back. I got to thinking...Joe will tell you, that this is always dangerous, and thought that we could renovate the outbuilding across the road. It is truly a shack and only 750sq. ft. It is her townhouse in the country, nestled under a cluster of oak trees. I called a contractor, to get started on the big stuff. We re-sided the outside, new doors, French doors, kitchen, bath, plumbing, electric, floors, sheetrock, we had to have it all. Victoria and I broke out our tools and tapped into our girl power, and tiled and grouted the bathroom floor. It was much sweat equity, and hoping this will encourage her to keep this floor clean.
Hoping to post pics, but cannot find them at the moment, with all that is going on. Cabinet tops are being installed tomorrow. To all of the women out there, (and men) who have to deal with the most outrageous people during this kind of a project. I had three bids for countertops, we are talking miniscule, counter space, and this one guy tries to explain to me that the black marble, that I have been saving for 15 years (long story, bought at an estate sale) and he says is junk, and that I need beautiful cultured marble instead. I could not believe that someone would come in and actually say, "Looks like you got a mess, this is just a bunch of crap!" I can give you beautiful cultured marble (FAKE MARBLE) for just a little more. I am thinking...you have to be kidding me. That is like saying, "My Louis Vuitton has a scratch, so let's throw it away and get a fake one?" ARe you kidding me!!! I politely declined and moved on.
Meanwhile, all of you Mom's out there know that the end of the school year is crazy and had a dance team banquet, and a band concert on the same night. Then the next day a party for my nephew, Christian, for his Baptism party.

Life is crazy and wouldn't have it any other way! Summer is almost here and I always think that I am going to sleep late, and then my mind will not shut off, with all of those decorating thoughts and inspirations, and so I absolutely have to jump out of bed and get busy! So much decorating and so little time. Love it, Love it, Love it!
XOXO Carolyn 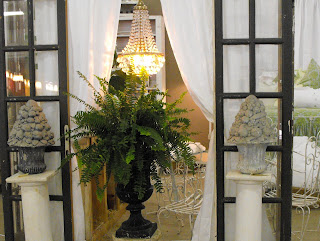 Hoping to see everyone, this Sunday, at the Urban Market Show in Houston, Texas. It is a fabulous show, with I think a collection of the combined "Best" vendors from Marburger, Warrenton and Roundtop. The displays are FABULOUS and this is where you can find, "The Good Stuff!" The best part is it is one day, 6 hour, shopping frenzy. You will see the best merchants from cross country including, Peg and Jon from "French Vanilla," along with Linda and Ludmil from "Willow Nest" who you have seen in a ton of magazines, and also my friend, Janet Weibe, who has KILLER pieces direct from France, that she hand picks across the French Countryside. The best pieces in my house came from these people. Don't get me wrong, all of the people at this show have phoenomenal things, so get there early!!!! We have a wonderful load of stuff, and I am especially fond of this pink and yellow "peely" outdoor iron set, with magnificent chairs. So, plan your day to be at this show!
I also have some new bedding, which will include a spectacular green linen.
Look on my "upcoming events" page for details!
XOXO Carolyn

Posted by Carolyn Westbrook Home at 10:21 AM 6 comments: