CWH LIve from the Plantation...

ok, so this has been the craziest summer..ever! It has been a wild ride around here. We are getting ready for a photo shoot this week, for the new book, which now has a title...Carolyn Westbrook: A French Country House, which we decided over dinner last week, as the publishers flew in from London...and might I say, a good time was had by all. Life always seems to be feast or famine, so back to back important business meetings, and something drastic happens, as it always does around here. Last Saturday, I noticed one of the doors was open on one of the warehouses here, and don't tell anyone, but every time I walked into that warehouse lately, I noticed the floor was "soft." You guys know what I mean when I say, it is one of those things that you do not want to deal with or have time to deal with, so I just kinda pretended that it was fine...and I would take care of it when I had the time to deal with it. Well, I went out to the warehouse, which apparently someone had been creeping around in, and when I walked through the door, there was a huge hole in the floor, where some creeper had fallen through. Now, that has to make you chuckle just a little bit, because first of all, this creeper guy gets in the warehouse and there is not one thing that he would want to steal. Now... if it was a girl creeper, they would be in heaven, but a guy would just look around and go, "huh?"It is all pillows, and furniture, and fabric, he was probably so disappointed, and then he falls through the floor. Can you just imagine the look on his face??

Obviously, I cannot leave a hole in the floor, so I go back the house, pick up the phone, on a Saturday afternoon, and there is no one answering the phone to come fix this. I am freaking out because I had already started a major renovation on the sun porch (for the photo shoot) and everything that was in there, is now out in the middle of the yard. Oh yea...looking good. At this moment I have a mess in the yard, and a hole in the floor and a photo shoot and a meeting just days away, not to mention the yard is pretty much burnt up, because we are living with 110 degree heat everyday, and we forgot what rain looks like. Nicholas a.k.a Nick, my son who is 15, comes out of the house and says that he can take care of that floor. He proceeds into the garage, brings out a sledgehammer and tromps off toward the warehouse. My nephew Christian is staying with us, and Nick drags him off of the games to enlist his help. We drag all of the stuff out of the warehouse into the yard. Now as I write this, you cannot imagine how much "stuff" is in this warehouse. It would be like if I dragged everything you own, out of your house and closets and multiply that x 10.
So, you get the picture. We piled the mirrors up leaning against the warehouse, thinking nothing other than hoping they do not get broken.

ok, remember me telling you about Chik-fil-a and the other two crazy roosters? They spent the entire next three days, strutting past the rooster (in the mirror) and puffing up and crowing at the other rooster, that was in the mirror. It was like fall down on the ground laughing funny. These guys are so full of ego and testosterone. Sunday was spent with everyone out in this warehouse pulling nails, joists (what was left of them.) Seriously, when we pulled the floor, there was nothing left. The joists were like sawdust...termites. Did I mention that it was 110 degrees? Nick and Victoria and all of us, pitched in and we got the joists rebuilt. Seriously, was amazing as Nick did the majority of the work, leveling, and placing them just so...at 15 years old. The termite guys came in Monday and did their work, to kill these pesky things and then a new floor was put in. While they were doing that, Christian and I and others, went to work on the sunporch to transform that space. I look out in the road and see a Range Rover, as someone was driving by, who had come to get a peek of the house. I'm thinking, what they must be thinking with "stuff" scattered all over the yard, and us wild looking people with sweat and dirt everywhere. You gotta laught, right? Just hope they are not taking pictures.

If you guys can remember from my first book, this space was all red, white and blue, which now had become a bit dated. We painted the floor glossy white and hung black and white stripe curtains. I hung black and white antlers and black glossy frames, it looked amazing, but it was still 110 degrees. Christian looks at me and asks me, "Aunt Carolyn, how much money do you make?" I asked him, why he was asking me this and he says, "Whatever it is...its not worth it." At this point, I might have agreed with him. It was absolutely crazy.

About that time, Christi pulls up in her brand new Yukon (SUV) that is black, all shiny and smelling brand new and you will never guess what happens next. Chik fil a decides to fly up on the hood of her car and when he starts sliding off, he starts clawing the hood, to get back up and claws the hood all the way to the ground. Christi is standing there in disbelief, as we all were. "I am gonna kill that chicken, she screams" while chasing Chik fil A across the yard. Luckily, we buffed it out, and were laughing later as she comes in saying, y'all were having fried chicken tonight! My mom said she could see Christi chasing Chik fil a across the yard with a hatchet.

Oh, and almost forgot the part about when Nick and I were bringing the rug and chest around from the sunporch to go in the other warehouse for storage, and I look across the yard and see a frog hopping...fast as he can. Around here, you rarely see frogs, mostly toads, but this was a real frog hopping as fast as he can with back legs outstretched flying across the air, like a cartoon. I pointed and told Nick, look at that frog and about that time, we both see the huge snake about 2 foot behind him, arched up in the air like a cobra flying across the ground, but his head and half his body upright. I have NEVER seen a snake do that and he is hot on the trail of the poor frog. We both at the same time yell, SNAKE! Nick runs to the house to get his gun and the snake stops dead cold, as I am hollering at him to get him to stay put. He is half upright turning his head to look at me, like a cobra would in the movies. Where in the heck is Nick, I am thinking. The darn thing lays down and starts slithering toward the garden, which is covered in flocks, and you cannot see anything here. Here comes Nick with the big shotgun, as he cannot find his other one, and he does not want to shoot, as this is an old gun with a huge kick that will bruise your shoulder. I run out to my pile of stuff in the yard, and grab a pillow, and run it back and say, put this on your shoulder. The snakes tail is barely hanging out of the garden, on the brick and Nick takes aim, with the pillow behind the gun and fires a very LOUD shot. The snake slithers off and we poked all around and the snake jumps out and slithers across Nick's boot and off into who-knows where. We did not find him, but the frog was saved.

Tuesday night, and it is still 110 degrees and we are shoving the last box back into the warehouse, sunporch almost final, and I have to go get ready for my big meeting the next morning. The people that I met with were disappointed that they flew in from New York and we did not get to meet at the house...if they only knew what had gone on up until that point. I decided to not have the meeting here, as only 8 hours earlier, I would have not had a clue that we could have pulled that one off. So, as I dropped one group off at the airport, I picked up the other group...photographers. Keith Scott Morton and I, feel like old friends now, so he did not mind the last minute clean up and preparation. In the end, the meetings went well, the photo shoot was great, and as I dropped Keith at the airport last night, and Joe and I drove home in the dark, I thought...I do not want to have to go outside all weekend. It is my birthday Monday, and I am going to stay in, under the air-conditioning, and lay across my bed and look at magazines and decorating books, and be lazy for once. Now, that will probably last about an hour and then I will be telling Joe, hey...I have an idea...and he will look at me with the one eyebrow up and say, uh-oh...not again.

Sorry Everyone, the show will not go on....

I want to apologize, but something has come up and we will have to cancel the Summer Vintage Market sale. I am sorry for any inconvience, but will try and re-schedule at a later date.

Happy Summer to Everyone! 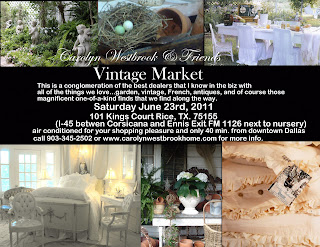 So, this is for all that have asked, when I am going to do my summer show. This is it..the information is here. It will be held one day, Saturday July 23rd from 9am-4pm in Rice, TX. (which is right up the road) and easy to get to off of I-45). Exit FM 1126 off of I-45 and it is on the West side, off of the service rd, and next to the nursery. Did I mention that it is air-conditioned?? I know we usually have an open air environment, but it is just too hot. I have invited some of my favorites in the biz, so you can imagine it will be a great show and only 40 min. from downtown Dallas and a little over 2 hour drive from Houston. For those in Austin, it is just a hop, skip and a jump. Last show, I had someone fly in from Ohio...amazing.

It will be loaded with awesome antiques, lots of garden stuff, furniture, and more.
I hope that everyone has a wonderful 4th of July, but you better find a swimming pool, a water sprinkler or a hose, because it is supposed to be over a 100 degrees again today. So, get the grill fired up, the airconditioner humming, and get yourserlf a big 'ol glass of iced tea with fresh mint...settle in somewhere with your favorite magazines or grab your swim suit and dive in...whatever you do, Enjoy your weekend!