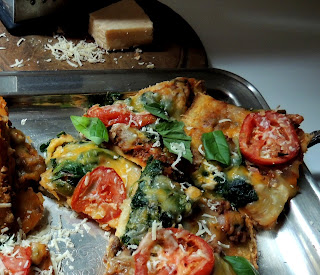 Here it is that time of year again...Super Bowl time. Now, I am not a huge football fan (unless it is the Cowboys, I am from Texas y'all) but I do love any excuse to throw a party! Tomorrow it is all about gathering with the wives, sipping dirty martinis or wine, while the men drink beer and yell at the television. It is also a time to have some great comfort food, while we're sipping. I made some homemade pizza for the party tomorrow and my son Nick loves homemade pizza. It is really pretty simple. Sometimes I make my own crust, sometimes I make it on loaves of French bread, but this time I used the store-bought brick oven pizza crust that is delicious. Here's what you do:

I preheated the oven to 425 degrees. Then I chopped up a medium size onion, sliced a handful of mushrooms, chopped 3 slices of bacon, chopped up some fresh basil, and threw that all into a skillet with a little olive oil. Then I added a small package of hamburger meat that was in the fridge, probably less than a pound. I put in about a teaspoon of Italian Seasoning, salt, pepper, red pepper flakes (optional), 1/2 teaspoon of Onion Powder, and 2 cloves of fresh minced garlic. As it cooked, I melted a half stick of butter in another small skillet and added a tablespoon of garlic powder, and melted butter. Then put that aside and go back to your mixture that is now cooked. Drain fat if necessary. Then add a half jar of prepared spaghetti sauce and mix. If you like spinach, which I do, then throw in a couple of handfuls of fresh spinach and let it wilt. I also added some sliced olives, but just customize it to your taste. This made two pizzas. Take the melted garlic butter and spread on to pizza crust. Then spread mixture over crusts all the way to the edges. Then add whatever cheese you like. I did Mozzarella and Colby-Jack. You can do goat cheese or whatever kind of cheese that you love. My husband does not like Feta, so much for that unless its for me and the girls. Then I added sliced tomatoes to the top sprinkled with a bit of olive oil, Kosher salt and freshly grated Parmesan cheese. Then put it in the oven until golden and cheese is bubbly.

Your friends are gonna thank you for this, that is if you can keep everybody away from it until party time. Nick has already been sneaking around stealing a slice here and there, as I try to take a picture of it. I'm not gonna lie, I might have had to taste test it myself. You know, I had to make sure it was good, and guess what, I'm still not quite sure, I may need another piece...LOL.