Carolyn Westbrook: Party at the Plantation 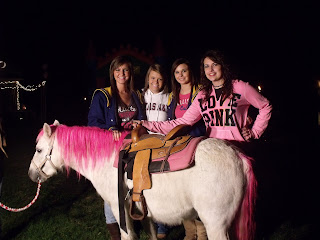 (Alex and friends had to get a shot with the hot pink pony.)
Hey Y'all! Last night was a huge party here at the Plantation and it was one helluvabash! It was time to celebrate with my niece Carrington's 4th birthday and Victoria's 22nd birthday. It was a pink confection with Hello Kitty everywhere. We have been from NYC to Houston, and trying to get all of the orders out this week, no time for a rest, and knew this party was coming up. Not to mention another photo shoot in two weeks and having the NYC team coming here...no pressure. But, it was all about the party yesterday and Alex decided she needed to go look at a new car yesterday, as we committed to getting something. We thought we saw the perfect Mustang convertible, so thought we could run to Dallas and have a look at the car, and then come back and get it all done in 2 hours. What was I thinking?? 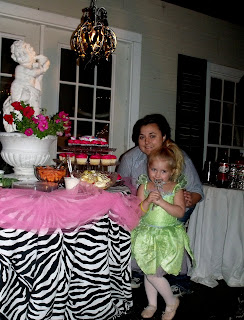 (Victoria and Carrington, the birthday queens of the night!)
I might have been a little over-confident as we were hustling to get it all done before the first guest. Christi and I were going crazy, and the Victoria's showed up to help. We called in all of the troops and everyone was busy doing something. I kept disappearing into the warehouse and coming out with good stuff, and then off to the barn and some of the warehouses to find tables, chairs, fabrics, drapes, etc. We strung lights, and had tables with tablecoths, it was all about the black, hot pink and princess. Chandeliers hung from the tree limbs over the tables and urns and statuary were the centerpieces. Cake stands were loaded with candied apples, and cupcakes and jars were full of hot pink taffy, and pink jelly beans.Even a pink glitter pony...wishing for one with "saddlebags full of money" after this party. We had a stage, music, karaoke, castle bounce house and loads of hot dogs, and fixins. We had all ages from 3-70 and everyone had a great time. At one point, EVERYONE was out on the floor doing the "Cupid Shuffle" dance. Totally fun for all. We roasted ooey-gooey marshmallows and had loads of hot dogs with chili. 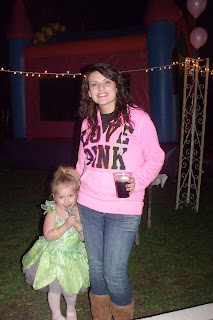 (Left: Alex and Carrington pose for a pic)
THe kids were going crazy, partly from sugar and partly from the excitment. The best part was when one of the little boys was running around and shouted, this is the best party that I have ever been to, and Alex said...I think our parties just get better and better. That was a home run!

Now have to get busy with the makeover of 3 rooms for the next photo shoot and Christmas decorations, as we are shooting Christmas in mid-November. So crazy, but at least it will be done! and just before the New York team comes in to discuss the fall/winter bedding line for 2012 at the plantation. The good news is...I could not be working with better or more talented people. They are hip, fun, and experts in the business of bedding.

Can you believe that it is almost November, boy this year has flown!

Posted by Carolyn Westbrook Home at 1:39 PM No comments: