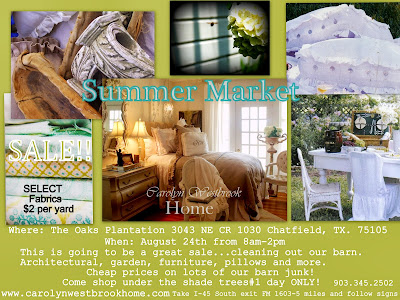 There will be signs from there pointing the way.
If you are a quilter, a sewer or just a lover of fabrics, then this is your sale. There are bolts and bolts of fabric for sale, CHEAP! We all know how expensive fabric has gotten, and these are amazing vintage style prints, toiles, tickings, and also bolts of my vintage- replica childrens prints, for anyone that does children's wear or product or just likes beautiful fabric. This is from my days of manufacturing children's wear. Most of these fabrics will be $2 a yard. Also, there is antique furniture, architectural, garden, concrete, wooden filing cabinet, frames, old prints, oil paintings, huge old wooden columns, lamps, lampshades, small showcases, and on and on. There is also some of the linen clothes that I made that are left. They are the long, linen, duster jackets and vests. They are one-size-fits-all. You just have to come see for yourself. Don't miss it!
xo Carolyn

Posted by Carolyn Westbrook Home at 7:34 AM No comments: 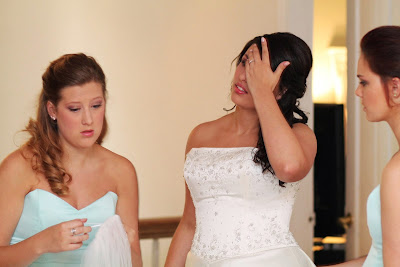 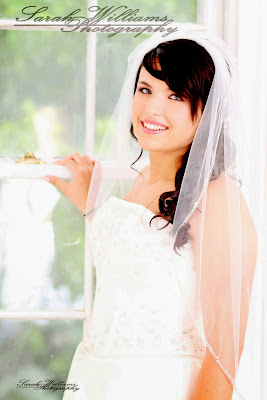 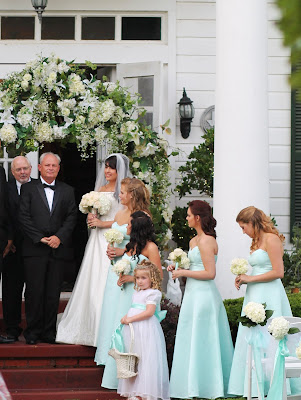 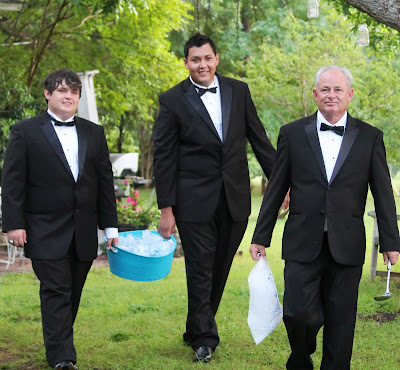 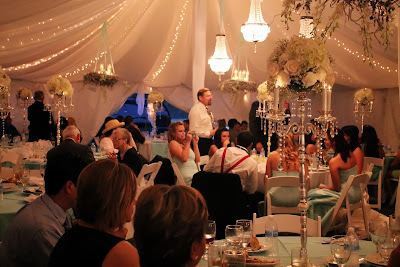 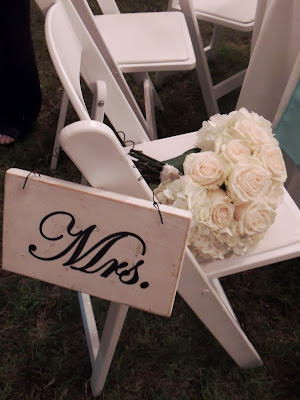 Posted by Carolyn Westbrook Home at 11:49 AM No comments:

Finally, I have time to finish this off. So, the wedding day was there and so were the clouds. I kept saying, don't worry the weathermen are never right. I was of course still decorating an hour before the wedding. I had the vintage metal couches, the outdoor furniture and loaded them with white linen and aqua print pillows and placed them outside of the tent. Everyone was upstairs getting dressed. Nick came out in his tux and he was in charge of setting up tables on the side yard that were topped with aqua metal washtubs filled with ice and bottled water for our guests. Joe was helping me and playing meterologist. We ran in to get ready ourselves and I ran upstairs and there are people in every bathroom. One of Nick's friends is in the shower. I was in a panic. Nick banged on the door and had him," Get Out!" I was thinking, this is not how this part was supposed to go. I was

putting on make-up and looked out the window and the skies let loose and the rain poured down. The bridesmaids all came running in screaming, "What are we going to do." It was 30 minutes before the wedding. Obviously, they were not going to be able to come out from the side of the house, like we had practiced. I told them to calm down...there was always a back up plan. Now, they would come down the stairs and out the front door. If things did not let up, we might be having the wedding at our church down the street. It was five minutes to "go" time, and the clouds parted, the rain stopped, and the sun shined. Joe and his friend were busy with towels wiping down the chairs, as the guests made there way outside to claim a seat. I had to stay upstairs and tell the girls what order to go

down the stairs, as they were in a panic.
The preacher signaled me, the music started and here we go. Joe and I looked at each other, and it all sort of hit us. He looked so handsome in his tux, and as he looped arms with Alexandria, it was so touching. Christi of course was downstairs cuing the music, and then it began. As the girls looked beautiful as they descended the stairs, and Carrington dropped flower petals for the bride. As Alex and Joe made there way out the door, Christi and I raced out the back door, around the side of the house and quielty claimed our own seat. It could not have been better. The preacher started the ceremony, and then the vows. As soon as the vows started, a blast of shotgun fire. Not just one time, but over and over. All the guests looked at each other, as the filming was catching all of this. The gunshots stopped, I was thinking, just a fluke. It was as if on cue when Alexandria started her vows, so did the shotgun fire. You could barely hear her the shots were so loud. Joe and I were whispering what should we do, and then my brother says, "Guess y'all have never heard of a shotgun wedding." Everyone laughed, and the wedding carried on. After that, at the end of the wedding, more shots, and at that point I am thinking that this is what makes the country so unpredictable, and something that we would look back on and laugh.
The ceremony was done,and everyone was on to the tent. Alexandria could not believe the tent, when she walked inside. She was stunned.
Champagne was flowing, candles were glowing, the doves were cooing, and there was the sound of laughter in the air. The food was served with southern pecan chicken, garlic mashed potatoes, French green beans, and a fabulous salad with pecans, feta, grapes, and such. We had a dessert bar with lemon bars, pecan bars, cheescake bars, brownies, each one set atop small individual white porcelain cakestands, and of course iced tea with mint, lemon and orange slices.
After the dinner, people gathered in groups everywhere, and it was such a romantic and happy night, as the music played and the candles glowed from everywhere. Joe and I were of course the last to eat, as we were trying to make sure that everything was taken care of. In fact, I really did not even get to talk to the bride and groom, and then they were leaving.The wedding couple made their getaway with bird seed being thrown and well wishes were cheered. A "Just Married" sign was on the back of their convertible Mustang done in of course mint green writing. As they drove off, Joe and I walked back to the tent and sat there for a while just surveying what we had accomplished. It was sad that it was over for me, I wanted to be able to enjoy the surroundings longer. It was so magical and we had worked so hard.
I asked Joe if he thought Alex had liked what I had done. He asked if I was kidding. He said that anyone would have to be crazy not to think it was amazing.
We both were happy, but also kind of sad, as our baby was now married. About that time, Nick calls, "Mom, telephone." He brought the phone to the tent, and it was Alexandria.
I could not believe it, as Alex is never one for words. She said, "Thank you Mamma, it was the prettiest wedding that was ever done. I cannot believe that you did all that for us. I love you."
I cried. She told me, "Tell Daddy that I love him, I have to go."
It was just like Father of the Bride, I thought.
That made every bit of it worth it. Joe and I looked at each other and toasted with a glass of champagne, as Nick and Victoria and friends were starting the fire pit, as the music played on into the night.
Posted by Carolyn Westbrook Home at 9:14 AM 1 comment: