Carolyn Westbrook :LIfe at the Plantation 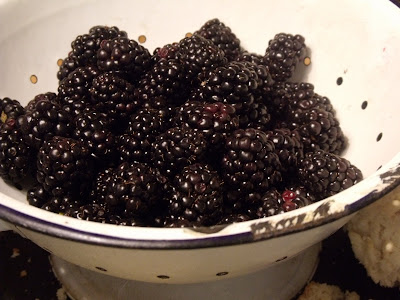 It is blackberry time! Yea!!! Nicholas has been busy plucking blackberries from the vine. It seems that Nick and my other son, from another mother, Brian found a plethora of blackberry vines over by the big tank, loaded with juicy, sweet blackberries. We promised him that we would make blackberry preserves, if he would bring us back a bucket, and he did. He put on the rubber boots and gloves, as you always have to worry about the snakes in the blackberries, hopped on the four-wheeler and a while later came back with these. We were able to get 16 jars of preserves and some of the best that I have tasted. Nicholas and his friends gather here most mornings for sausage gravy and biscuits. That is one thing that I do love, is to have a whole house full and we are the go-to house on the block. I even taught Nick how to make gravy and biscuits, in case we are not here. Now not many 14-year-old boys could make homeade biscuits and gravy...girls I am telling you, he will make a wonderful husband someday!
This morning, I woke up to the smell of hot buttered biscuits. Seems Nicholas rose at 6am to make a pan full of biscuits, for the wonderful jam that we made. I think he loves it more, because he picked them. So, I go downstairs and Nick and his friends CHris are sitting in the kitchen having biscuits and jelly...priceless!

So, trying to live up to our pinky swear promise by enjoying summer. I have to say this...on the way home on July 4th, we stopped and met some friends over by Cedar Creek lake. We went to this little hang out by the lake, walked in and were invited to take part in the food that was all caught or grown locally at the lake. There was fried catfish, fried green tomatoes, a fabulous pasta salad, sliced tomatoes, onions, a little chow-chow and the best garden peppers that I have ever eaten. Not hot, just the right pepper taste. I made off with some of those for the seeds, so that we could plant some next year. Joe and I were talking, that there is not many places that you could go and be invited for home cooking, by people that you have never met. So, we filled our plates, got ourselves a beverage and went out into the parking lot, overlooking the water, and were able to see about 25 different firework shows going off at the same time!
How's that for a fourth to remember!

Let me know how your keep enjoy summer pledge is going! Hope that it will be one to remember! xoxo Carolyn 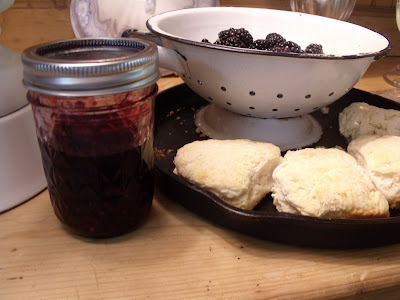 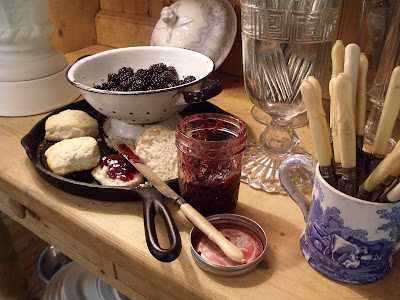 Your preserves look delicious!! Love blackberries. I can some to make blackberry pie and cobbler in the colder months.

How wonderful that your 14 year old can make sausage gravy and biscuits. That sure is a plus in a future husband. The girls will be in line for sure.

These look yummy! I see you are in Chatfield. I grew up in Rice (small world), so we used to have blackberries like these! I really miss going out and picking them and then making a blackberry cobbler! Of course, we always had to watch for snakes. I'm in Frisco and Crawford now and still watching for snakes!

You are making my mouth water. If by chance you are selling any of that good looking jar, I'll take one :)

That looks really yummy, my peaches are ready to be make into a cobbler! Lezlee